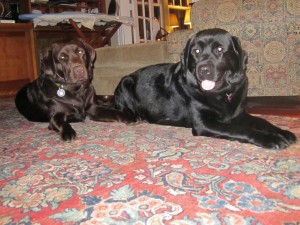 The puppies are by birth order, color and sex.
I will update when a pups has a home below.
Black M
Choc M
Choc F
Choc F
Choc F
Black F
Choc F 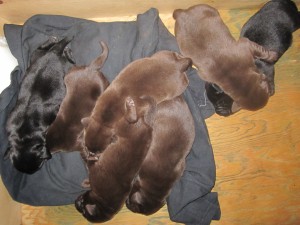 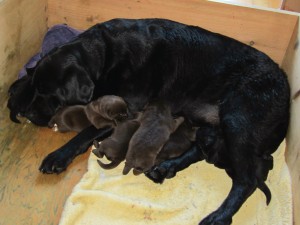 Chester was overwhelmed all on his own and curled up with one of my quilts, silly boy

I couldn’t resist the urge to arrange them as they were sleeping . I call this one a “Puppy Line Up” 5-days old in birth-color-order.

June 7 – I made this 1:06-min video of the litter this morning after they had finished nursing. They are full, tired and trying to nestle together.  Their sounds are quite common, along with their “twitches.” They are actually quite calm! I could watch this all day long. CLICK IMAGE TO START VIDEO 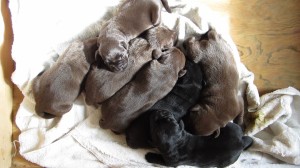 June 8. They keep growing and growing. The little girl is in the middle of the pile and the “Big Boys” are the black above and the choc to the far right. Stella still has a hard time staying away, even though I encourage her to do so more and more.

June 9: Stella is as attentive as ever.  Look at those bums!

June 10: Today I found some of the pups in a funny pile.

It reminded me of when my last litter (2002) formed a “puddle of puppies” as well. They were older and had ventured beyond of the whelping box. I count 5 noses – can you?

June 12: They are getting much bigger, so much they all can’t feed at once. This photo was taken yesterday. We are feeding Stella 3x+ a day to keep up with demand!

This choc male is starting to open his eyes and show his laid back personality. You can also see how much bigger he is from the little, last female, who has a darker chocolate color. Rest assured, that little girl is the feistiest of the bunch! 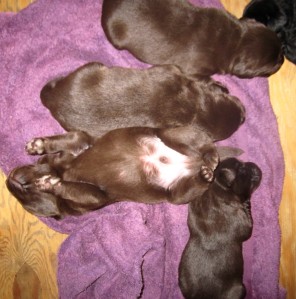 June 14: Puppy Pile! I have been remarking how quite and calm this litter has been. I saw one starting to walk on all fours today. Several eyes are starting to open. Can you see how they love to sleep and cuddle together.

June 16: I found the puppies all lined up toe-to-nose, except the little girl of course. Look at those little ears!

June 17: My granddaughter came over to see the puppies – every little girl’s dream.

June 18: And they are learning how to walk! Eyes are opening and they can hear sounds. Click image for :32 second video of them walking (and some peeing!)

June 21: It’s the summer solstice and 98-degrees outside. They puppies are doing their best to stay cool. I clipped their toe nails and gave them their first dip in water – a little bathing in the sink.

June 23: I can really only take images of them while they are sleeping because otherwise they are moving around too much.

June 26: We went out and took individual pictures of the pups today at almost 4-weeks.. Some came out better than others – they move around a lot! 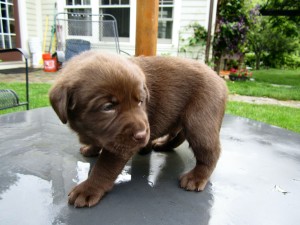 Choc F – looking for a home 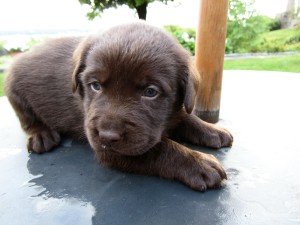 And they are learning how to eat. I am supplementing their diet with baby rice flakes and formula. It took them 24+hrs to learn how to lick and not suck the liquid. It is wicked cute because they get the food all over each other and then they start licking each other. Some even step in the bowl. I know they will get this down-pat fast. 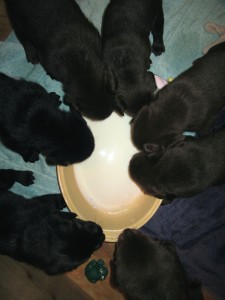 June 29: Puppies just love shoes, maybe because they are smelly or because they have soft, chew-able surfaces like shoelaces. This one took it to a whole new level. This puppy explored my old, stinky shoe like it was a cave exploration!

July 1: Their first day outside! We set up the pen for them to play in. Lots of new sounds and new textures. We are starting to make Stella wean the pups and introduce them to new environments and settings. They were so excited, they soon fell asleep on the cool grass…ahh.

July 2: Video of romping outside this afternoon. They really enjoy the extra space and lots of more area to play and hop about.  Click image for :32-second video

July 5: This video shows what the puppies are like after they have been fed. Miserable cuteness! Click image for :40 sec video. 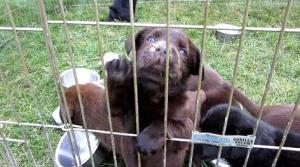 July 6: In less than a week, we go from introducing them to baby-rice-cereal, to feeding them in individual bowls. This is what breakfast looked like this morning.

At midday, I took them to my daughter’s day camp so the puppies could get socialized to more people and new contexts. They came back exhausted and piled up in the crate. This photo gives you a good understanding of the “puppy room” and why you sometimes don’t see them on the PuppyCam because they are sleeping outside the viewable area. 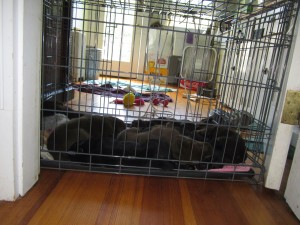 July 8: We had several families come over and visit with their pups.

Roxie with her parents

July 9: It’s amazing how much they change in a week.  Presented in birth order. 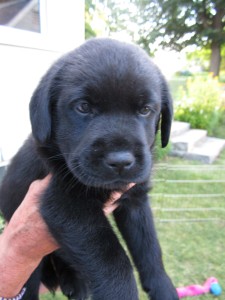 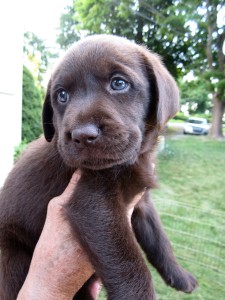 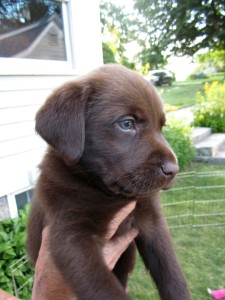 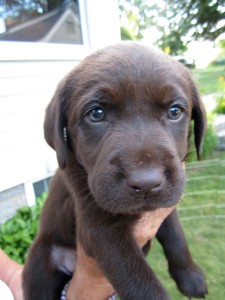 LOOKING FOR A HOME (female) 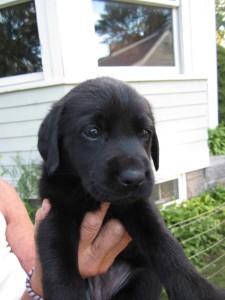 July 10: Our neighbors who moved to Rockport came over to visit with the puppies. Jack really didn’t know what to make of the situation! Click image for :14 second video.

Boothe’s “Big Boy,” on the other hand, was quite content as always… 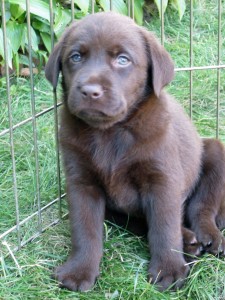 My daughter Jen came down from VT to play with the puppies. This video shows what they are like when they meet new people! 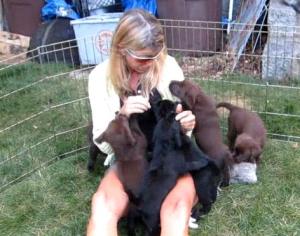 JULY 14: We had a lot of family over this weekend and the puppies got a lot of attention.  This shows what they are like when they are so excited they just flop. Click image for :48 second video. 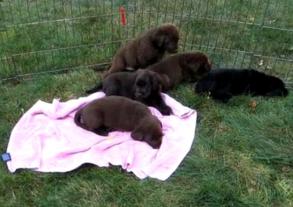 July 19: I took the puppies to a local garden where I volunteer. I think they liked the car. And, yes, that is my license plate.

PHOTOS AT SEVEN WEEKS – Many are going to homes next week so this may be the last full photo shoot of the litter. They are presented in birth order. They are getting so big and are looking more and more like dogs, not puppies, every day! 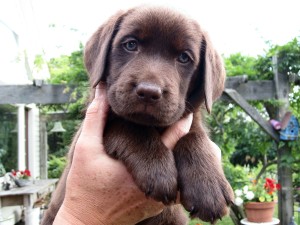 July 20: This video shows what it is like when I open the door to the “puppy room” to let them out in the morning. It’s a “puppy waterfall”! Click image for :10 second video.

July 22: We had a lot of families visit their pups this weekend. One of them helped out with feeding, as this video shows. For the last week we have been feeding them 1/3 c each 3x a day. I swear they grow an inch every night! Click image for  :56 second video. 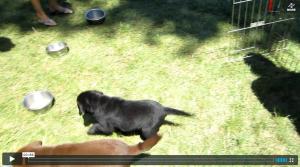 July 24: Rounding the corner to the last few days with the pups before they go home. Their ears are getting so big! When they are upside down the look like fruit bats – a favorite pose of mine. This one is of HAZEL. 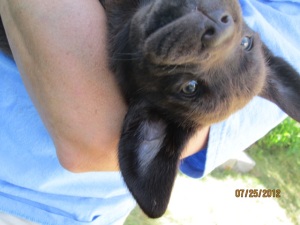 July 25: Every time I approach the puppies when they are in the pen I get this reaction. It is pure puppy torture – or puppy hysteria – take your pick!. Click the image for :34 second video. 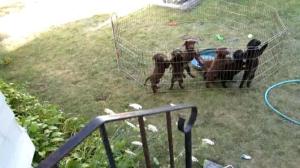 You can see how much they have grown since the “Miserable Cuteness” video from July 5. Click the image below to enjoy the :41 second video again and make your own observations and comparisons!

July 26: PUPPIES at WEEK 8 – These are our final photos of the pups as many are going to their new homes tomorrow, Friday July 27 {so sad!}. Presented in birth order. 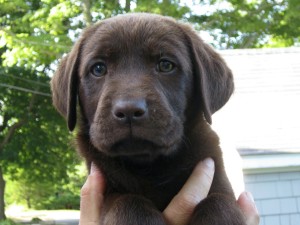 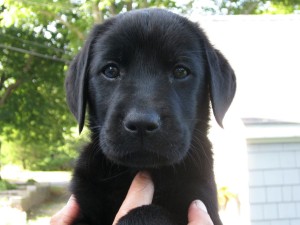 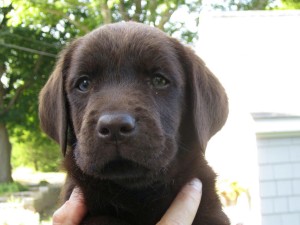 Things are coming to a close with this litter and I felt it was only right that I add a final picture with me and the pups.

Thanks for watching! We are planning on having another litter next summer, this time crossing Stella with a yellow male. Stay tuned! 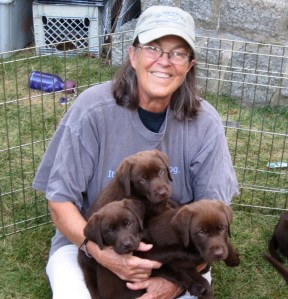